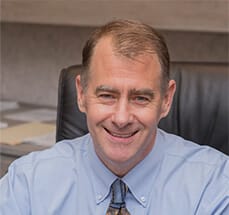 Derek Davis focuses on business disputes.  He is ‘of counsel’ to the firm and is currently on sabbatical from his law practice.

Davis joined his father’s firm in 1995 after receiving his J.D. from the University of Texas School of Law. He initially focused his work on plaintiff’s personal injury cases, achieving numerous notable verdicts and settlements.

In 1998, he handled a case involving gunshot injury suffered by a 16-year-old boy that resulted in a multi-million dollar jury verdict. The boy was on a hunting trip when his .22-caliber firearm failed to fire. Assuming the gun was empty, the boy set the gun down to reload it. The gun then discharged, striking him in the leg and causing an injury that led to amputation.

As a personal injury lawyer, Davis also won an important defamation case in Utah on behalf of a TV news reporter who had been fired and unable to find subsequent employment due to statements made by her employer. Contact him today for a free consultation.

In 2003, Davis pursued a new venture, launching a real estate investment company. With that business experience under his belt, Davis returned to Byrd Davis in 2008 as an “of counsel” attorney, concentrating his work on commercial litigation. Those matters range from partnership disputes to breach-of-contract cases. He also serves as an outside counsel to small companies.

Davis prides himself in providing the same steady legal guidance to clients in business and personal injury cases.

“It’s important to look out for the client’s interest,” he says. “What I hate is running into attorneys who are looking out for their own bottom line. They tend to fan the flames of a dispute so they can keep their meter running as far as their billing goes, instead of just cutting to the chase and getting something done that helps their client. My own personal philosophy is to look for the earliest point at which I can resolve a case for a client in their favor.”

Whether he was trying a case, assisting a business client, or writing appellate briefs, Davis derives a great deal of professional satisfaction from the practice of law.

“I like when I can help a client realize they have options they didn’t know they had,” he says. “I enjoy helping them reach solutions that make them happy and that maybe they weren’t aware were a possibility.”

Away from work, Davis enjoys spending time with his family and engaging in household projects and woodworking.