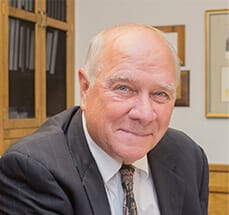 Listed in the Best Lawyers in America, Don Davis joined the firm in 1966.  He is retired from the day to day practice of law, but remains a valuable resource to Byrd Davis Alden & Henrichson, LLP.

Mr. Davis is Board Certified in Personal Injury Trial Law by the Texas Board of Legal Specialization.

Mr. Davis has tried cases in both state and federal courts in Texas, Oklahoma, Washington, Oregon, California, Mississippi, Illinois and Louisiana. His cases include plaintiff’s personal injury claims against most of the major automobile manufacturers in the United States and Europe and corporations such as the American Tobacco Co., Cessna Aircraft Co., Yamaha, Travelers Insurance Co., Ensearch Corp. He has successfully litigated against The United States of America and in 2006 recovered $6.75 Million (after attorney’s fees and expenses) for a class of utility customers who were charged for fees they were exempted from paying.

Don Davis is listed in Martindale-Hubbell’s Bar Register of Pre-Eminent Lawyers comprised of select firms and attorneys who have earned the AV Peer Review Rating. An AV rating shows that a lawyer has reached the height of professional excellence, has usually practiced law for many years and is recognized for the highest levels of skill and integrity.

Mr. Davis is a faculty member of the Page Keaton Civil Litigation Conference, an annual conference for attorneys sponsored by the University of Texas School of Law and is a frequent speaker and author of numerous articles for the continuing legal education of fellow attorneys on matters relating to wrongful death, products liability, medical malpractice, jury selection and settlement negotiations to name a few.

An avid sculptor and golfer, Mr. Davis has created numerous original sculptures for the PGA Tour, the PGA of America and the LPGA Tour.