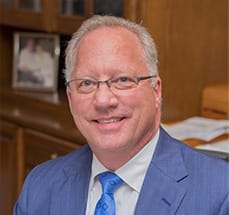 Robert enjoyed a career as a commercial litigator for a number of years before he decided to focus on serving people who had been hurt, instead of defending wrongdoers and trying to protect insurance companies.

So in 2001 he joined Byrd Davis Alden & Henrichson, LLP and began representing plaintiffs in personal injury lawsuits as well as plaintiffs in business disputes. Alden is listed in both Best Lawyers in America and Texas Monthly’s Super Lawyers. He is Board Certified in Personal Injury Trial Law and Civil Trial Law by the Texas Board of Legal Specialization

“I switched to plaintiff work from defense work because I like helping people with problems that often are the most significant problem in their lives and are beyond their ability to deal with on their own,” Alden says. “It feels good to help people in need like that, especially in the area of personal injury, because they’re people who have had their lives turned upside down.”

Alden’s trial work has earned him acceptance into two prestigious professional organizations, the American College of Trial Lawyers, the American Board of Trial Advocates (ABOTA), and the International Academy of Trial Lawyers. Lawyers can only be admitted into these groups by invitation and must meet rigorous requirements dealing not only with trial experience and ability, but also with civility and professionalism. In October of 2017, Alden was elected to a three-year term on the ABOTA Foundation’s Board of Trustees. He was elected to serve as president of the Texas chapters of ABOTA, TEX-ABOTA, for 2020.

Alden earned his undergraduate degree, with honors, from the University of Texas in 1980, where he was a student in the prestigious Plan II honors program. Before entering graduate school, he spent two years teaching and coaching at a boarding school in Connecticut. In 1987, he received his Doctor of Jurisprudence and Masters in Public Affairs degrees with high honors from the University of Texas. Alden received honors in law school as a Chancellor and Order of the Coif, and he served on the editorial board of the Texas Law Review.

Alden began his legal career as an attorney with McGinnis Lochridge & Kilgore in Austin, focusing on commercial litigation. In 1994, he opened his own practice, before joining Bracewell & Patterson in 1997. He stayed with that firm for four years before joining Byrd Davis Alden & Henrichson, LLP.

His work has resulted in several multi-million-dollar verdicts and settlements. Other of Alden’s cases, while not resulting in large monetary results, have improved lives for many Texans. In one of these cases, the City of Austin was forced to change its drainage-fee ordinance because it discriminated against multiple-family residences by charging them significantly higher drainage rates than were charged to single-family and commercial property owners.

A Love of the Courtroom

While Alden gets satisfaction from helping individuals, he also relishes the competitive aspects of being in court. “To some extent, a jury trial is like teaching a class—you’ve got people you need to educate—and I enjoy doing that,” he says. “But there’s definitely a competitive aspect to it. It gets your adrenalin going. It can be a real battle of wits, especially when you’re dealing with opposing expert witnesses.”

Unlike some lawyers who will employ “scorched earth” tactics in their quest for courtroom victories, Alden believes that attorneys must project civility and professionalism at all times.

“I think that both the judges and the juries appreciate lawyers that do things the right way, and that are well prepared,” he says. “The jury has to trust you. If it doesn’t, you’re never going to win.”

“Robby represented my family in a lawsuit very recently that should never have been a lawsuit at all. Robby handled our case professionally, keeping us informed every step along the way. He is smart, personable and highly professional. He could not have been better prepared and our case ended in a “Plaintiff takes nothing” settlement. The entire process was terribly frightening for our family and Robby walked us through the process encouraging us every step of the way. I can’t recommend him highly enough.”

“Robert C. Alden is a truly exceptional advocate and litigator. Robby represented my family and its insurer in a potentially devastating lawsuit filed against us by a husband and wife who were both lawyers. Though we knew the plaintiffs’ claims were false, it was still a very frightening experience. His representation resulted in a minimal nuisance settlement by our insurer and a full release of liability for my family. Robby prepared an incredibly thorough detailed factual defense that succeeded in decimating each and every accusation alleged against us. We could not have asked for better representation. Robby is smart, hardworking and of exceptional integrity. We knew we were cared for with the strongest advocate fully on our side and willing to go the distance to achieve justice for us. I can’t recommend Robby and his extraordinary skill set high enough.”

“Robby Alden was involved in a case involving my nephew. Although he represented another party in the case, I observed Robby’s work in the process. Robby is one of the most tenacious trial lawyers in the state. His attention to detail is unsurpassed.”

“Mr. Alden was very sincere from the beginning. He was very poised, very articulate when working with the juror’s. Never augmentative with the judge or any witnesses. Robert was just, very factual and to the point! Communication appeared to be a priority to him and helped coach me through the process that was ahead, and helped me to understand what to expect! He focused more on how to overcome the issues, rather then more on a “similar” past case. I am not one to list “all” excellent and I usual list a mix of poor, standard and/or good. But I cannot think of when I have ever listed all excellent rating!”

“I had received 2 medical device implants that were recalled and subsequently failed. From the moment I walked in the door to discuss a possible case I felt completely at ease with Mr. Alden and all of his associates. They were warm, but professional. If I had a question or concern they were quick to respond. My case was taken care of by Mr. Alden and his team with a more than fair result. I don’t feel I was taken to the cleaner by my lawyer. Very much the opposite. A super nice guy and a very competent lawyer!”

“Robbie is an excellent lawyer. Sharp, very experienced, and has a good reputation among his peers. I wholeheartedly endorse him.”

“Robby Alden is one of the finest lawyers I know — he possesses impeccable courtroom skills and unmatched integrity. Robby goes the extra mile for each and every client and enjoys a first-rate reputation in the Austin legal community.”